Jet Essentials 2015 Update 1, was released earlier this month. This blog gives an overview of some great new features in this release.

This improvement is obtained through the use of the new Table Cache feature.  Information about this feature can be found in the Jet Reports online knowledgebase.

With Jet Essentials 2015, Dynamics NAV 2015 users can use five different credential types to allow them to connect to their NAV 2015 data. These include Windows, User Name, NAV User Password, Access Control Service (ACS), and Office 365 (also known as OAuth) authentication.

This can be set on NAV 2015 data sources by selecting Data Source Settings > Authentication and selecting the desired credential type. 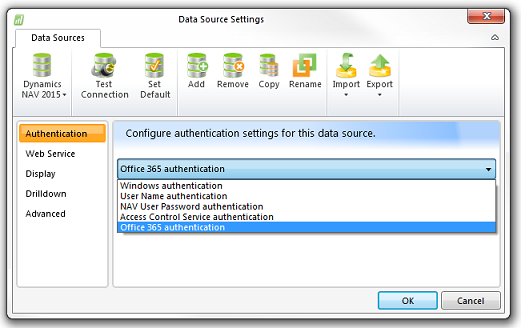 It provides a fast, secure connection method for environments where Jet users have Excel installed locally and their Dynamics NAV system is hosted on a different domain (in the cloud).